A sphere of cheese illuminates the darkness of night as the piercing beams of dreams of light stab the sky like an invasion of glittering monster thingies with the waving things and err, whatever. “What time is it?” said the cat in a box whose survival had just become that little less-questionable. Suddenly, or a little time after suddenly, the sun fell off the sky, and the worms took over.
I hate people; I hate people that leave the cap of the toothpaste thus leaving it to go hard. I hate people that tie the plug chain around the tap fingers. I hate people that say things like “I tell it as it is” or “whatever” whilst attempting to create a double-u sign with their hands. I hate people that re-use teabags. I hate people that shop in their pyjamas. I hate it when people use Metaphysics to assist them in labelling their beliefs as scientific theory. Metaphysics will never be regarded as a true field of science, as Metaphysics appears to be nothing more than a very large bucket, for idiots to vomit their views into, with little, if any, requirement to scientifically justify their incoherent dribble. Thus, I’m leaving you Metaphysics, it’s not you, it’s me. (Meaning it is ‘all’ you, you bigoted hermit)

About Silly Cats
Started in 2008 the blog has since then been discontinued... These are a selected few archived blog posts starting with the last post first. 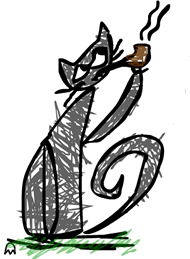 Silly Cats Smoke Pipes
Exclamation of contempt occurring without definite aim, reason, or pattern. This is the home to self-eradicating gluttony and feigned psychological-gratification. Get some red plonk, cigarettes, and some cake and succumb yourself to the fabricated sensations of pleasure galore. Don’t squander thoughts on hangovers, diets, and personal hygiene. Spend your days instead intoxicated and aggressive. Then die young of an overdose in a hotel room surrounded by prostitutes, in a poetic symphony of self-pity and artistic contempt. Label every man, woman, and child a parasitic monkey, shout "how dare you", spit out your fag in disgust, "Good day sir!" and slam a door!
Short Stories
Links
Meta